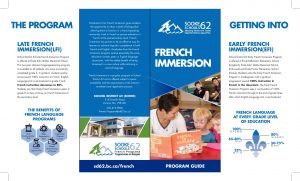 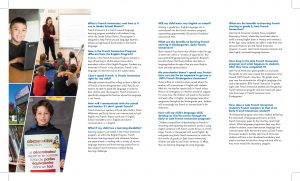 What Is Late French Immersion?

What are the program goals?

How is Late French Immersion taught?

Students are taught the same curriculum as English students but the language of instruction is French. At first, students have limited vocabulary so teachers concentrate on language. Later as language skills develop the smaller details are filled in. The method used is very similar to that used in English as a Second Language classes, i.e. a proven methodology.

What about the students’ academic achievements?

Research shows there is absolutely no detrimental effect on academic performance in any subject area despite learning in a new language. A larger English vocabulary could be a spin-off as French words are often similar to English words. In the Foundation Skills Assessments in Grades 4, 7 and 10 students are tested in English in reading, writing and numeracy. French Immersion students do better on average at all grade levels.

How fluent will students become?

Are all subjects taught in French?

What characteristics do students need to be successful?

What commitment do Parents need?

What is Canadian Parents for French?

Founded in 1977, Canadian Parents for French (CPF) is the national network of volunteers which values French as an integral part of Canada and which is dedicated to the promotion and creation of French second-language learning opportunities for young Canadians. With approximately 200 chapters across the country, CPF offers concerned adults the opportunity to work with others who are committed to enhancing the quality of French second-language education.

French Immersion is an optional program available at the discretion of local school boards. CPF Chapters advise and assist parents to work co-operatively with school administration. 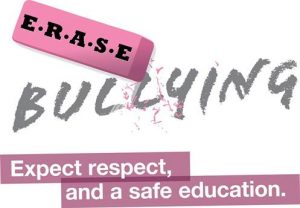